Why is melanoma so dangerous?

It’s All About Depth.

At Skin Analytics we put all our energy into catching melanoma early. But why? Because if a melanoma grow just a fraction of a millimetre too deep, its much harder to stop.

Before we talk about why that is, lets get into some biology.

Melanoma is a cancer of the melanocytes, which are cells that produce a pigment called melanin. Melanin gives colour to the skin, hair and eyes. Melanocytes can also form moles, where melanomas can develop. Although most moles do not become cancerous, it’s important to spot the rare ones that do.

There are three main types of melanoma to know about:

But don’t worry, melanomas most commonly occur on the skin, so if you’re checking regularly, they can be easily detected early.

What happens if a mole is diagnosed as a melanoma?

We’ve alerted you to a change in a mole. You’ve gone to see the doctor and its been diagnosed as a melanoma. What happens next?

The doctor will take a small sample (a biopsy) and send it off to a lab for testing. In the lab they will look at the cells in the melanoma and the skin cells around it to determine the type and stage.

The different types (described above) grow at different speeds so its important to find out which one it is. The doctor can usually tell by looking at it, and the test normally supports the diagnosis.

The test also determines what stage it is – based on how deep it has gone into the skin, or if it has gone to other parts of the body. The depth is measured using two scales the Clark scale and Breslow thickness.

The Clark scale measures how far down through the layers of the skin the tumour has gone, and the Breslow thickness measures the total size. 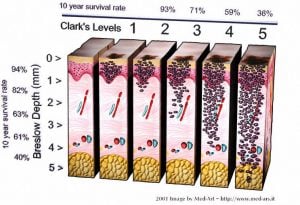 If it is an early stage melanoma, and has not gone too deep, the doctor can remove it surgically in the clinic, with no need for further treatment.

If it is at a later stage and has spread deeper, the doctor may want to take a sample of a lymph node to check for distant spread. Lymph nodes drain fluid from the tissues and are often a site for the spread of cancers.

The stage of the melanoma is based on four pieces of information:

Once melanoma has spread to other parts of the body (known as stage 4), it is called metastatic melanoma, and is very difficult to treat. But, if you regularly keep an eye on your moles melanoma can be easily caught at an early stage.

If you are worried about a particular mole, it is always good to get it checked by a doctor.

There are lots of good sources online for more information on melanoma, including a book you can download from the American Cancer Society.